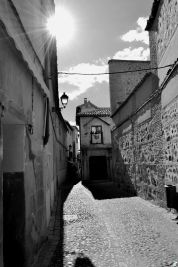 I visited Toledo about a week ago, a town not far from Madrid. No one can tell anymore for sure how old the town in the heart of the city walls is, but there are evidently vaults dating back to the first!!! century.

The historic city centre  only measures up to about a mile in diameter, but you are still prone to get lost – that’s what happens if you build streets before the Romans come along with their organized city planning ;)

Toledo to get an overview. This way, we could admire the massive city wall and were presented with information via headphones. Should you take it at some point please make sure you get a seat on the right-hand side – then you’ll have a view that’s unrestricted by other passengers, which I learned the hard way. Anyway, the ride is worth its while. Especially because they take you up to the hill right across from Toledo, where they stop and you can take picture and enjoy the view. (The city was too large to fit on one picture so I tried to stitch them together as well as possible.) 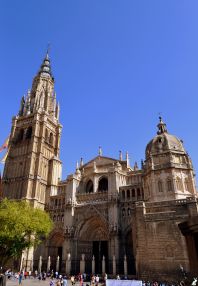 The special thing about the history of Toledo is / was the more or less working convivencia – the peaceful coexistence of the three biggest groups in Spain: Moors, Jews and Christians. Each of these groups contributed to the cityscape in their

own way and time. The grand cathedral, the Jewish quarter and  Moorish ornaments are spread all over the city and it is great fun to explore everything. Especially if you can enjoy such fantastic weather as we did.

Unfortunately, road construction works and a case of extreme tiredness prevented us from making it up to the Alcázar – the grand fortress of Toledos. For the historic 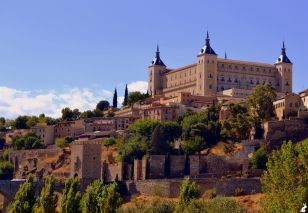 city centre is located on a hilly mountain, protected by water from many sides, it was able to defend itself practically without props. A castle was deemed necessary later on in the 16th century, though. I have the highest respect for the many (and probably unfortunate) people who built these impressive city walls and fortress in the middle of a nearly barren, hot and quite steep piece of desert. Around here isn’t much else to be seen if I am honest. 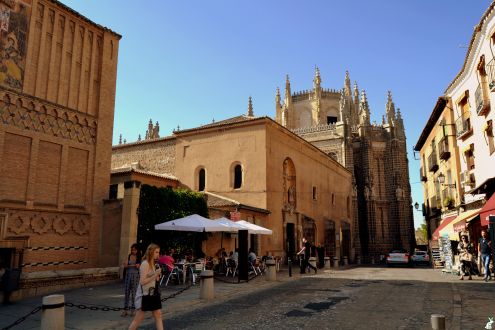 The local Mazapán de Toledo, the city’s own kind of marzipan, is a delicacy which was invented by nuns in the 12th century – simply because there wasn’t much else in the region but sugar and almonds that one could find in abundance. We sampled this (according to Wikipedia) world-famous treat, one shouldn’t miss out on experiences like that. But we were in agreement: Lübeck, we remain loyal to you.

Another speciality is the blacksmithing; everywhere you turn you find artful as well as artificial knifes, swords and any other kind of 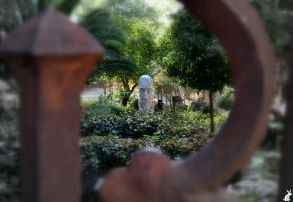 cutting, stabbing or firearm weapons. The former are sadly but justly expensive; the latter are affordable but rubbish. I would’ve loved to visit one of the blacksmiths, but I couldn’t find one and I don’t think they would’ve been open on a sunday anyway. Instead we nearly stumbled across Mister Cervantes, who tried to scare us from the shrubbery ;)

In summary, Toledo is a fantastic city and we were completely done in the evening due to the heat, the ongoing walks up and down the city and the many impressions we gathered. Just taking in a perfect sunset and then off home with us! Should you ever be in Madrid make a detour there.