I haven’t given you a new recipe for quite some time so I got my pans out and made a Spanish tortilla just for you – easy, rustical and yummy. 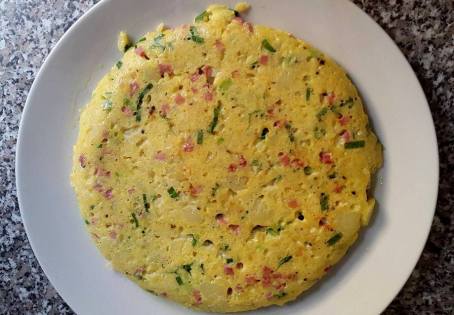 4 potatoes, slightly less than a pound

a lot of olive oil

Peel and thinly slice the potatoes, place them in a large skillet with a lot of olive oil. Fry the potatoe slices at medium heat and take care that there is enough oil in the pon so that the slices are swimming and won’t start to roast. Add diced onion.

When the potatoes start to get soft (about 10 Minutes) mash them with a fork until you have a nearly mushy consistency. Please be careful here, you are after all handling boiling oil. After having mashed everything let it simmer for a short time and then drain the fat. I use a colander to catch the oil and I re-use it later for frying, like the Spaniards do.

Mix eggs in a bowl, add potatoes, salt and pepper. I strayed from the original recipe leaving out the onion and adding spring onions and cured ham dices at this point.

Give some oil into a smaller pan and fill in the mass evenly. The tortilla is only baked shortly (about two minutes) on high heat from both sides in Spain, leaving its insides mushy. You can store the leftovers in the fridge and eat them cold the next day but I’d suggest baking it well through in this case.

About flipping the tortilla: take a big plate, cover the pan with it and flip them upside down together. The raw side of the tortilla is now on your plate, so that you can just let it slide it back into the pan. This way you’ll prevent that your tortilla breaks and it will stay pretty.

There are of course – as always – innumerable possibilities of how to pimp your tortilla. One of the best ones I’ve ever had had dried tomatoes and Camembert in it. There are no limits to your imagination.

I got a tortilla of 18 inches that was an inch high out of the recipe. It is expendable as you need it, just take one egg for each potatoe (it should be about as big as your palm).