A while ago I visited a German friend, who’s spending her term abroad in León, a cute little town that isn’t too far from Valladolid. Unfortunaltey, the weather was wet, cold and rather hazy, so our minds where rather set on a nice cup of tea instead of sightseeing. Of course, we had a look at the most important sights anyway and eventually it got really nice in the evening.

León is a rather small town smack-dab in the middle of Castille and León and it’s – how you probavly already guessed – the capital of the province. You can find lions all over the town for león means lion in Spanish; but if you did your homework you know that the town’s name is actually derived from the latin word legio for it was founded by the seventh roman legion in the first century. So this is a damn old town. But enough of the history lessons ;)

León is an important stop at the Way of St. James (Camino de Santiago) with the cathedral ‚Catedral de Santa María de Regla‘ as the heart. One has to pay an entrance fee to visit it, though, and I decided to delay seeing this attraction, because I am planning of walking the camino myself anyway. However, we heard from locals, that there is an inconspicous side entrance to the Colegiata de San Isidro, a smallish basilica, and if a tired and exhausted pilgrim passes through this door he has finished the Way of St. James practically in an unofficial kind of way. Naturally, we had a look at that and saw one pilgrim or another.

León is simply a charming Spanish town with beautiful little alleys that speak of a very, very long history. I liked it a lot and I am looking forward to seeing it again and waking it’s tiny streets. 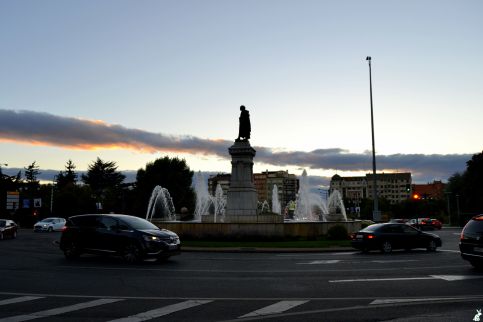 The best thing was, however, meeting my friend from home. Being abroad you meet so many new people all the time, which is awesome, but it also means you’re starting all  over and over again all the time. So it’s just really nice fro a change to meet someone, that you already now and that you have mutual friends with. :)